“Burn It Down” Nihilism Is Harmful Too 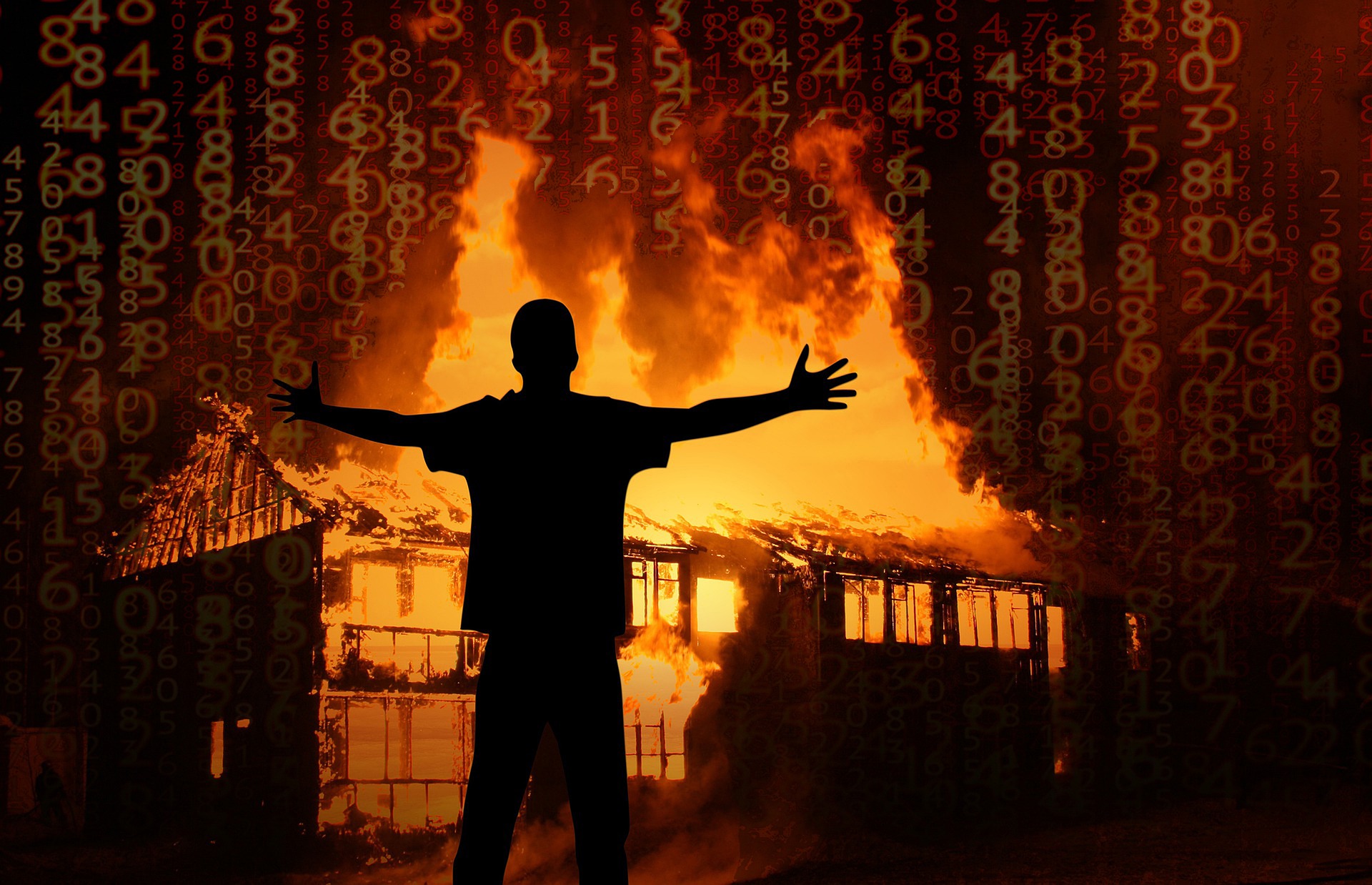 Image by Omni Matryx from Pixabay

These are truly fascinating times to be an investor. Markets seem to be going through a generational phase shift, and not necessarily for the best. I see a culture that is leading itself away from prosperity and towards the abyss, and I’m helpless to stop it. My emotions run the gamut watching events unfold, oscillating between indifference and unbridled rage. I can end up in a dark place. “Just burn it all down!”, I think at times. It turns out that I’m not alone; though truly, I wish I were. While my nihilistic outbursts seem justified, they’re actually just as harmful as the culture I’m repudiating.

In my last article, I postulated how the ideology of postmodernism permeates financial markets. I see it manifesting as heavy-handed regulations, endless interventions, and a neurotic obsession with markets’ continual rise. Here, I will comment on the reaction to this, which I see as nihilism. To be sure, I believe postmodernism’s influence on markets is negative, so I’m sympathetic to this opposing view. However, the perceived antidote may be just as dangerous as the poison.

Nihilism is another philosophical framework. Like postmodernism, it has variants. Some common threads are that life is meaningless, pursing values is pointless (and even childish or silly), that the world is unknowable, and that this is all just some kind of arbitrary social construct. Whatever the particulars, nihilism is pessimistic, cynical, and focuses on destruction.

Nihilism refers to a number of different views in philosophy, all of which express some form of philosophical pessimism. Different forms of nihilism hold variously that human values are baseless, that life is meaningless, that knowledge is impossible, or that some set of entities does not exist.

Holding these views creates a psychological state of hopelessness, angst, and rage. Why devote yourself to a career if life is meaningless? Why struggle to solve interesting problems if knowledge is impossible? And if this is just some kind of dream or a social construct, who really cares what happens? F*ck it! And look at those pathetic fools who think that this matters!

When some men fail to accomplish what they desire to do they exclaim angrily, “May the whole world perish!” This repulsive emotion is the pinnacle of envy, whose implication is “If I cannot have something, no one can have anything, no one is to be anything!”

Nihilism’s purpose is destruction. It does not seek to create anything positive or right a wrong. Rather, its focus is the elimination of negative elements (real or perceived). While this removal can be useful in the pursuit of values—and even necessary—achievement and creation is what makes for a healthy life. Absent this context, the nihilist’s central purpose is solely the pursuit of destruction.

I see streaks of this destructive craze in financial markets. There are various undercurrents of “burn it down” … well, really more like “burn it the f*ck down!” (aka BITFD). Factions of investors aren’t just angry; they’re enraged over what investing in today’s markets has become (real or perceived). They resemble nihilists.

This market nihilism manifests in a few ways. These include:

There are probably more. Note the streaks of helplessness, confusion, futility, and rage. These create a reflexive loop such that markets seem foreign and unrecognizable. They aren’t what they used to be. The rules changed. They are infuriating to trade. BITFD!!!

The basic anger is logical—many things are actually and deeply unjust. The intensity of the anger is the deep desire for substantive change. It’s a driving force for change in the right direction. The feeling of hopelessness against the powers that be exacerbates it. I also think [BITFD] is somewhat metaphorical—i.e. they don’t mean to literally burn everything down in an apocalyptic manner, or do they?

Note that sentiment’s essential characteristic is negativity. There are even traces of alienation. The focus is not on trying to make the most of these markets, as messed up as they may be (real or perceived). Rather it’s to condemn them all together.

As noted in my previous article, there’s a constituency of investors who see the investment markets as rigged. Central banks and covert “plunge protection teams” backstop equity markets to ensure that they never decline. Masterfully choreographed presidential tweets about vaccines and trade deals arrest any stock market softness. The “fundamentals” are weak and these interventions prevent investment markets from properly functioning.

What’s the point in doing investment research if governments, central banks, elites, and the Pentavirate ensure that all stocks rise all the time? How can one possibly demonstrate his/her skill when the entire market only goes up such that cheap EFTs perform best? If it weren’t for the Fed and … oh, BITFD!!!

It is widely believed that investment prices reflect the fundamentals of the underlying asset. These vary by type and come in many flavors: earnings, leverage, cash flow, supply/demand, inflation, etc. Thus, prices reflect what’s happening in the “real world.” Wall Street and Main Street are synched.

Today, though, there’s a sense that the link is severed. If markets don’t reflect the fundamentals, then what makes them tick? If analysis no longer explains market moves, then what does? Price fluctuations appear random. Investing becomes a game of chance. As a result, the investment markets resemble a casino. If returns aren’t linked to skill, then what’s the point? BITFD!!!

These notions feed into views on monetary policy. Healthy capital markets create prosperous economies. Thus, rigging them—even if only to rise—sows the seeds of harmful crashes that are even larger than otherwise possible if left alone. Like brush fires, small and frequent ones are preferable to large, uncontrollable, and catastrophic ones. Low interest rates and market interventions like quantitative easing (QE) interfere with markets’ abilities to self-correct and perpetuate growing imbalances. Financial markets are now an avalanche waiting to happen.

There are rightful critiques of such interventions. However, many prescribed fixes lead only to destruction. Their goals are strictly to disrupt the current state of affairs. They are not sustainable solutions. Thus, they are nihilistic. Take these two, for example: 1) setting monetary policy randomly, and; 2) appointing an erratic personality as president of the Federal Reserve.

Stan Druckenmiller had a fascinating proposal, that on its surface, feels like the opposite of a technocrat. His proposal was, that at every Fed meeting, there should be a random number generator, and if it spits out a particular range, the Fed randomly raises or lowers interest rates by 25 basis point.

Why would you do that? Well, simply, because it reduces people’s willingness to engage in leveraged speculation.

Take the proposal to set interest rates randomly. Its aim is to reduce “leveraged speculation.” That seems desirable on the surface, right? However, the result would be harmful. First, there’s nothing inherently evil about speculation (leveraged or not). Speculation is at the core of investing and entrepreneurship. Adding more uncertainty (i.e. randomness) reduces our ability to engage in productive speculation. So while “evil” speculation might be slowed, so too would innovation. Secondly, if monetary policy were set randomly, then one could literally gamble on it. Gambling’s popularity suggests that randomness wouldn’t eliminate speculators.

The same goes for Hugh Hendry’s recommendation. In a recent report, Hendry suggests that investment markets would benefit from more chaos(!). He postulates that chaos could break the malaise and force banks to lend more, hence boosting economic output. Appointing Joe Rogan to head the Fed might do the trick according to Hendry.

If people can’t bear higher interest rates, then let’s give them something else. CHAOS, anyone (emphasis added)? If I were at the Fed, I would appoint podcast-superstar Joe Rogan. Joe Rogan for president! No, not of the White House, but the Fed! …. Just the shock and the majestic irresponsibility of having Chairman Joe at the table should do it (emphasis added). … the Fed, would insist that private-sector bank loan growth must be maintained at 50% above its rolling five-year average. Failure to comply and… ka-boom!

Hugh Hendry, The Dawn of Chaos

While I have the utmost respect for Hendry, this seems like a preposterous proposal. Capital flows to where it’s treated best. Chaos is decisively bad for investment and economic growth. History is littered with failed economies lead by erratic dictators. Chaos does not breed prosperity; it breeds poverty and despair (and ka-boom!).

To be sure, I’m quite sympathetic to these stances. As I’ve written, I believe that cheap Fed liquidity has only encouraged more debt creation in the economy. However, neither proposal seeks to improve the monetary system (like my favorite alternative to disband the Federal Reserve system and replace it with a free banking regime). Rather, they solely seek to destroy the existing one. What comes after the ruin? Blank out.

In my view, the rise of passive investing also plays a part in this narrative. Passive investing has replaced many professional active managers. The former has literally wrecked the latter’s livelihood.

From the active manager’s perspective, their underperformance is unexplainable other than the markets are rigged. Their careers have been wrecked not by a lack of skill, but by the unjust environment. For the active manager, it’s as if they’re up against a horror film monster. There’s no apparent weakness to attack. This breeds alienation, anxiety, and a whole host of negative emotions. BITFD!!!

It’s tempting to succumb and pray for destruction believing that skill will shine in a down-market. But this is the wrong approach. A more constructive view is to build a better investment process for the current landscape, even if that means rethinking everything.

Investing is a distinctly human action. Thus, the financial markets merely reflect ideas that permeate our culture. While I find the dominant, postmodern ones dangerous, I take no comfort in the opposition’s. Like a child throwing a tantrum, BITFD is nothing more than an emotional outburst. It’s not a strategy for building a better system. Destroying existing markets is pure nihilism.

Contrast this with the founding of America. The Founding Fathers did not react to the colonial injustices and tyranny with BITFD. Rather, they revolted in order to take control and build an entirely new political system. This, is a positive, rational, and pro-life mentality. Imagine if instead they resorted to burning down the colonies? There’d be no America!

To be sure, we are in desperate need for a change in course in the financial markets. They are invaluable to a modern society and an incredible engine of prosperity. Breaking them purely out of hatred is akin to cutting off one’s nose to spite his/her face. It’s nihilism.

So please, no! Let’s not BITFD. Let’s take back (intellectual) control of the investment markets. Let’s revolt and overthrow the bankrupt incumbent orthodoxy. Capital markets are far too valuable to relinquish or recklessly destroy in an emotional-charged outburst. We need them to build a better future. After all, that’s what investing is all about.

4 comments on "“Burn It Down” Nihilism Is Harmful Too"